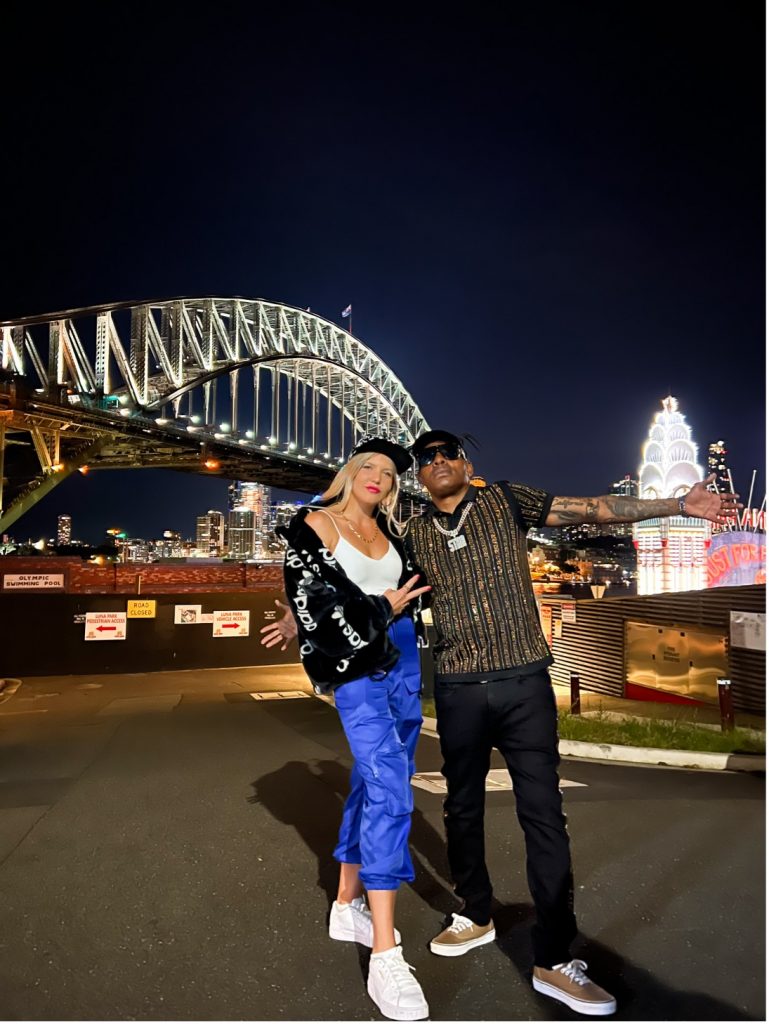 Unexpectedly marking a posthumous release for one of the most successful rappers of his time, the new single Do You Want It by the legendary Coolio and featuring Australian rap and pop artist Katija is a cheeky yet dominant jam loaded with lashings of vivid sensuality. Having been in motion prior to Coolio’s untimely passing, Do You Want It releases today as previously planned by both Coolio and Katija on October 28; and, by sheer coincidence, the track’s unveiling falls exactly one month since the world lost the pioneering rapper, producer and actor.

Bringing together Aussie rapper Katija’s sharp delivery with Coolio’s trademark flair, Do You Want It was inspired by the music and cheek that Coolio himself was feeling while visiting Australia. Having met Coolio while he was in Melbourne, Katija’s fateful in-person introduction to Coolio at the time inadvertently grew into creative and collaborative magic, with Coolio soon reaching out to Katija to feature on a new song he’d been working on. “It was one of those times in life where the stars just aligned,” shares Katija of meeting and eventually working with Coolio. “I had just started working on my first few singles at Cosmic Bounce Records Studio’s in Brunswick with my talented producer KB. Coolio was here in Melbourne for the Made In The 90s Tour and he was introduced to the studio by Scorpion Media who had met him behind the scenes at the Bliss N Esso concert where he performed Gangstas Paradise in February this year. Coolio had a creative itch to start writing music again, you could see it and feel it in his energy. Coolio said he had been to many other studios in and around Melbourne yet had never finished a song and said it wasn’t until he walked into CBR that he finally felt at home. It was the night of my first video clip shoot for my single Lullaby and here was Coolio just chilling on the couch hanging out after he just finished a recording session with KB. Coolio stayed the entire night to hang out with us and even started writing his own verses to my song. Two weeks later Coolio was in another session with KB working on one of the few songs they had started together and he decided Do You Want It needed a female feature artist. As we had already started to develop a relationship, I came by the studio, sat in on the session and then began to put pen to paper and write the female version of his verses as my reply. Before I knew it, I was in the recording booth with Coolio mentoring me on how to execute the lyrics on his track.” KB adds, “Coolio saw something special in Katija before she even stepped into the booth, he’d tried to finish songs with feature artists, but had trouble finding artists who could match his energy, but Katija did just that.”

Boasting sultry horn samples, swaggering beats and oscillating audacious vocals between Coolio and Katija, Do You Want It started life as a beat that instantly connected with Coolio via its fresh and fun 90s inspired sound. Co-written by Coolio and Katija, produced, engineered, mixed and mastered by Kristo Beyrouthy, aka kb808 – the creative spark behind the head-turning beat, Do You Want It went on to evolve into its jaunty end result via Coolio and Katija’s unique sonic strengths, with Katija also drawing on her adoration for another iconic rapper for her hypnotic vocal stylings on the new tune, as she explains, “My favourite rapper of all time is Eminem. I was given the nickname Feminem growing up because all I wanted to do when I went to parties or hang out with friends was to show everyone how I can rap any of Eminem’s songs word for word, breath for breath. The beat for Do You Want It was produced by kb808, and instantly Coolio loved it, it was something different compared to what he had heard in other studios. The writing came so naturally to him, because the sound was familiar to his 90s style, music background and influences.”

Harnessing her love of performance and all things creative before going on to study music, dancing and acting, Katija has frequently appeared on stage in musicals and has worked as a professional Brazilian Samba and Go-Go dancer; but her passion and natural ability for rapping has continuously been apparent, with the talented Sunshine Coast-turned-Melbourne-based artist dreaming of life as a rap artist and hip hop dance performer. Temporarily putting her dreams on hold six years ago to support herself and her mother financially, Katija has tirelessly worked behind the scenes over the years to not only bolster her personal and professional pursuits, but also to truly manifest her ultimate creative desires; a fact that also led to her dancing on stage with Coolio in Sydney for the late rapper’s Made in the 90s Festival appearance.

While the world collectively mourned the untimely death of Coolio on September 28 this year, Coolio’s legacy inevitably permeates, from his rise as part of WC and the Maad Circle to his Grammy Award-winning single Gangsta’s Paradise, a giant array of film and television appearances, eight studio albums and global acclaim since first emerging professionally in the late 80s. With Do You Want It planned for release on October 28 well before Coolio’s death, the single was also intended to be the first of many more creative collaborations between Coolio and Katija’s, as Katija reveals, “This release had only just scratched the surface of the adventure we had planned, we set the October release date in July. The peculiar thing about this date is that it falls exactly one month to the day of his passing and we felt we needed to honour what was already set in motion and follow through with the release date as planned, even though the circumstances had changed, it is what Coolio would have wanted.”

A bittersweet last musical gift showcasing Coolio’s incomparable artistic talents, Do You Want It is unapologetically fun and fearless; a modern nod to the rap gods of old alongside an enigmatic showing from a magnetic Aussie artist. “Coolio truly was one of the world’s greatest and most iconic rappers of our time,” Katija concludes. “He paved the way for rap and hip-hop music to break into the pop music scene and opened the door for many of the great hip-hop artists to follow. To be featuring on a song with one of my biggest idols in the hip-hop music scene is absolutely surreal. I am beyond grateful and blessed for the opportunity I had to work with Coolio. Even though our time was sadly cut short I will cherish the memories of time we spent together and the relationship we built. Now all I can say is I am honoured to be able to share one of his last ever singles with the world and give everyone the special gift of being able to hear Coolio’s iconic voice on a new song one more time.”